The Holyday of Pesach

Pessah is one of the most important holiday of the Jewish calendar. We celebrate the miraculous exodus from Egypt, the end of slavery and the Jewish people, thus formed and free, can now go towards the Promised Land, Israel. 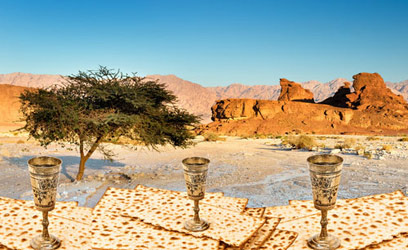 Thus, every year, we remember that this freedom is not attributed systematically to us but has to be maintained, preserved and forged. The Torah tells us about the arrival of Joseph and his family to Egypt more than 3300 years ago. After a period of abundance and pleasant life, Pharaoh decides to enslave them brutally, reserving them abominable living conditions. Then takes place the birth of Moshe Rabbeinu (Moses) who is chosen by G-od to save the Jewish people through the “plagues” that the Almighty  will bring to Egypt and first of all to Pharaoh. The latter will be forced to let the Hebrews go, and in an ultimate outburst of cruelty, will launch his army after them. Then comes the episode where G-od opens the Dead Sea to let his people go. As for the Egyptians, they are engulfed by the waves. Start then, a long journey into the desert where the Hebrew people will receive the Torah.

PESACH, HOW TO GET READY

As Pessah approaches, it is common practice to clean houses and offices, especially to search for any trace of Hametz to eliminate. Hametz means, of course, bread but also every food that went through fermentation or that contains yeast (flour, pasta…). This is also true for the five cereals, wheat, rye, spelled, oats and barley. This operation ends on Pessah’s eve with a ritual call “Bedikas Hametz” where we search with a lighted candle in every corner of the house, for any trace of forgotten Hametz.  In order not to undertake this action (and its blessing) in vain, we have the custom to hide a few bits of carefully wrapped bread. They will be symbolically burn the next morning and we will recite a prayer saying that we consider as dust every Hametz not found and still in our possession. 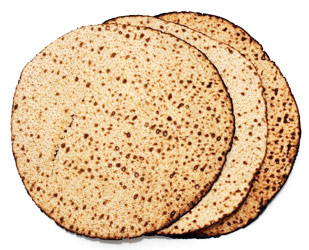 One of the main symbol of Pessah is the Matza (unleavened bread) that we eat throughout the holiday. We eat it in memory of the exodus from Egypt, when the Hebrew had to leave in haste and had no time to raise their bread. However, the Hametz also represents the evil inclination, that “ferments” our desires and instincts, thus turning us away from the commandments of Torah, and consequently from our proximity with the Creator. 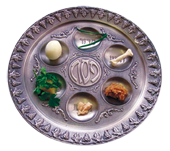 The first evening of Pessah, we gathered around the family table and we proceed to the Seder ceremony, according to a very specific “order”, punctuated by rituals. We begin with the Kiddouch (prayer on wine), first cup that will be followed by three other cups according to the HAGGADAH ( 2 cups before the meal and 2 cups after the holiday’s meal). We eat bitter herbs to symbolize the harsh working conditions of our slaved ancestors. The Harosset (a paste composed of dates, apples, nuts,… kneaded with wine) reminds us of the mortar used by the Hebrews in their hard work. 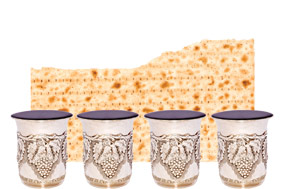 The presence of a bone alludes to the pascal lamb and the egg reminds us of the destruction of the holy Temple of Jerusalem. The reading of the Haggadah tells us about the highlighted moments when we went out of Egypt, and we can take advantage of this to read commentaries of great exegetes. The subjects that we approach talk mainly about the horrible conditions of slavery and about the divine intervention through the ten plagues of Egypt, leading to the liberation of the People of Israel. It is our custom to ask questions and usually a child reads the second paragraph of the Haggadah starting by: “How is this night different from any other nights?” In Israel, the Seder takes place on the first evening, while in diaspora we celebrate it the first two evenings.

The second night of Pessah begins the daily counting of the Omer, period of seven weeks that separates Pessah from Shavouos (the gift of the Torah). It was for the people, out of slavery, the necessary time to get ready to receive the Torah. 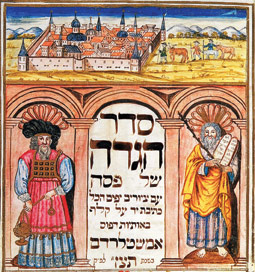 The first two days and the last two days of Pessah in diaspora (the first and last day in Israel) are called days of “Yom Tov”. These are non-working days, holidays, very similar to the unfolding and prohibitions of the Shabbos. Between these two periods, there is an intermediate phase of 4 days in diaspora, called “Hol Hamoed”, and considered as a festive time accompanied by a restriction of activities (it is advisable not to work, and so on ...)
Finally, on the last day of Pessah in the evening, after nightfall at the end of the holiday, we celebrate the “Mimouna”, a North African custom, that took a national dimension in Israel. We prepare pancakes “mufleta” that we eat with honey and sugar while drinking mint tea. These evening takes place usually accompanied by the sound of Judeo-Arabic music. In Israel, many families go for a walk the next day in parks and joyfully organize barbecues.
Pesach 5777 :  Tsidkat Eliaou organizes a large distribution of food parcels for the destitute families of Jerusalem. Participate to this wonderful Mitzva of Kimha dePisha!