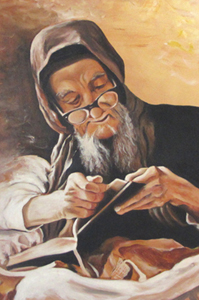 This great Saint was born in Morocco in Tafilalet in 5650 (1890) on Rosh Hashana. He was the descendant of one of the most illustrious families of the Sephardi community, the ABIH'SSIRA family, whose ancestor was Rabbeinu Shmuel Elbaz of blessed memory who lived in Jerusalem 400 years ago. Rav Elbaz was named “the father of the mat” in Aramaic “ABIH'SSIRA ” on the day when he was refused the access to a boat that was sailing to Turkey where he intended to raise funds for the poor. He proceeded to sit on a little mat and he prayed with such fervor that he started sailling on the mat in front of the stunned gaze of witnesses. Since then, the miracles of the ABIH'SSIRA family have not ceased.

The father of Baba Sale was Rabbeinu Massoud ABIH'SSIRA, eldest son of the holy and illustrious Rabbeinu Yaakov ABIH'SSIRA, a great scholar of the Torah, both in its revealed meanings as well as in the Kabbala of the Ari zal. Indeed, before Rabbi Yaakov’s birth, his father had a dream in which it was revealed to him that his son would be a great Sage whose holiness and erudition in Torah would illuminate the world. 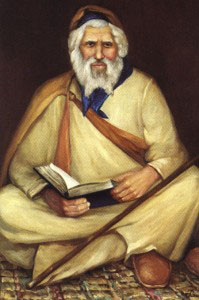 Thus was born Rabbi Yaakov in 5567 (1807). As a child, he was versed in the texts and demonstrated exceptional intellectual faculties as well as extreme humility only equalled by his awe of Heaven. His day and night study of the Talmud and halakhic deciders, as well as the Kabbala of the Ari zal, showed the phenomenal erudition of this holy man. The many miracles he carried out were the fruit of great purity. He personally carried out innumerable acts of generosity and kindness for poor Jews, some of whom were totally destitute. He left this world on the 20th of Tevet 5640 (1880) without having fulfilled his dream of reaching Israel.

Baba Sale inherited these exceptional qualities from his ancestors. On the day of his Bar-mitzva, he gave a sermon that revealed his exceptional abilities to the community of Tafilalet, which was greatly impressed and henceforth accorded him great respect. At the age of nineteen, following the death of his father, he was chosen to head his father’s yeshiva. At the age of twenty-eight, he has accorded the title of dayan (rabbinical judge).

A mikveh (ritual bath) was built in Morocco but it became unusable due to extensive droughts. Rabbi Israel implored the Creator to let rain fall and thus enable the Jewish community to lead a holy life. By the end of the holy man’s prayer, rain began to fall and the mikveh filled with water. It was then that Rabbi Israel realized that the mikveh did not conform to the opinion of Gaon NODAH BIHOUDA, so he decided that it should be emptied in order to abide by the rulings of all the halakhic deciders. The community, which had witnessed the miracle of the rain, feared that there was little chance of a second miracle. But Baba Sale prayed to Gaon NODAH BIHOUDA in heaven and asked him to intercede with the Almighty so that the Jewish people could enjoy a mikveh of absolute purity. This was done. Rain began to fall and the mikveh filled with water a second time..

In 1964, Rabbi Israel left Morocco to settle in Israel in the small town of Netivot in the south of the country. He lived in a modest house and his door was always open. He granted time to every visitor, strengthening his faith and blessing them. Thousands of Jews from all over the world came to receive guidance from him and a sublime blessings. His prayers had such a powerful impact in Heaven that he was able to save the lives of many Jews and accomplish numerous wonders. Hundreds of pages would not be enough to narrate the miracles carried out by this great Saint, with the blessing of the Almighty.

Baba Sale studied 18 hours a day the Nigle (Talmud and halakhic decisions) and the Nistar (Kabbala). He inherited his kabbalistic erudition of his grandfather and used in his prayers and meditation the kavanot, which had originally been formulated by the Ari zal and revealed only to the initiated. His knowledge of Torah was phenomenal. Words are inadequate to describe his greatness, humility and love of Israel.

In 1920, when he was just 30 years old, Rabbi Israel visited Rabbi Shomo Eliezer Alfandri, the Saba Kadisha, then aged 95. As soon as Rabbi Alfandri set eyes on Rabbi Israel, he got up and asked the latter to bless him. The story reverberated far and wide and the Jewish people became aware of the holiness of Baba Sale.

On the 4th of Shvat 5744 (1984), Rabbeinu Israel returned his pure soul to his Creator at the age of ninety four. He was buried in Netivot. More than one hundred thousand people, from all over Israel, attended his funeral on that sad winter day when the world lost one of its pillars.
The illustrious, holy ABIH'SSIRA family and the memory of Sidna Baba Sale, of blessed memory, have continued through the wonderful tzadikim of today. May the Holy One Blessed be He grant them many days.

May the merit of this Great Tzadik Sidna BABA SALE be a blessing for all the Jewish people and lead us swiftly to redemption (geula) in our days. Amen.